Before you start exploring the tropical treasures of the Amazon jungle, the floating villages of Lake Titicaca, and the mountain of Machu Picchu, discover the striking contrast of Peru’s capital Lima. Practical and elegant, fascinating and entertaining, rich and poor, ancient and modern: Lima is truly a city of contrasts. About one-third of all Peruvians call this metropolis home and they live in everything from humble hilltop shacks to modern high-rise condos. 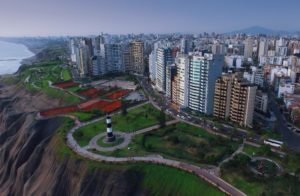 Lima is an ever-changing city that has a surprise for you at every turn. All you need to do is prepare your senses. You will be immersed in the sounds of chaotic traffic along the boulevards of Central Lima while quiet benches await you in the coastal parks. Everywhere you turn in this city, you will taste the salty sea air and at the same time feel the hot desert sun.

Follow the Bajada de los Bancos to experience the bohemian side of Lima. It is a walkway that runs from the coast to the quaint Barranco district. Stroll over the Bridge of Sighs which is a place of a forbidden romance between a handsome street sweeper and a wealthy girl.

El Malecon is one of the city’s many public parks where the rich and poor find common ground. It is a continuous stretch of flower beds and paths which allows you to explore the Miraflores district coastal cliffs on foot. In this neighborhood, you will almost forget Lima was built on the ruined temples and pyramids of civilization. 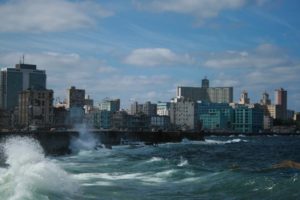 Huaca Pucllana is in the heart of the city and place where you can retrace the steps of the people of Lima. It is also a place of sacrifice and ceremony from about 1500 years ago. The locals here still observe the beliefs and rituals of their forefathers despite being committed Catholics today. The Spanish conquistadores introduced them to this religion along with the Baroque architecture and Castilian language.

Visit the Plaza de Armas to see fine examples of their colonial legacy. In the 16th century, Francisco Pizarro a Spanish explorer founded Lima here. His quest to make this city the country’s capital started with the construction of the Cathedral of Lima. Inside the cathedral, look for the gold-plated altar, early religious artworks, and Pizarro’s tomb. Pizarro worked and lived in the Government Palace just across the street which is now the government’s official seat.

In 1821, Peru gained independence but the Spanish influence still remains. Take a peek inside inner-city libraries and museums to find colorful tiled courtyards, soaring glass ceilings, and stately rooms. The 18th century Museo Larco is another highlight of this city which stands on a 7th-century pyramid ruin.

The colonial mansion in the Pueblo Libre district is home to an impressive collection of golden jewelry, artworks, and ceramics from pre-Columbian times. The exhibits here show the history of the ancient country through arts and crafts. After having lunch on the patio, see this museum’s most talked about pieces by crossing the garden.

Remember Lima is the perfect stepping stone to the many historic, cultural, and natural treasures that Peru is so famous for. Choose from the snow-capped mountains, fertile altiplanos, lush rainforests, and coastal deserts to see the many faces of this beautiful country.